This past week the Department of Art chartered a bus (with wifi!) to go see a Christo & Jeanne-Claude exhibition and talk. The show (a special exhibition at Lauren Rogers Museum in Laurel) seemed a bit out of place among their permanent collection which primarily consisted of 19th century paintings and relics. 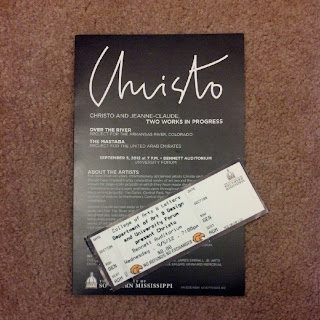 I heard complaints among a small group of students who didn't seem to quite see the point in the exhibition. I've personally always found the exhibitions to be an exciting look into their process. It's also the closest many people will ever get to seeing the physical things they've created (save through videos and photographs) as their works are all large-scale and temporary.

The talk was in Hattiesberg at USM. It was my understanding that there was no photography allowed, but I did manage to catch a quick cell phone picture of Christo answering questions. 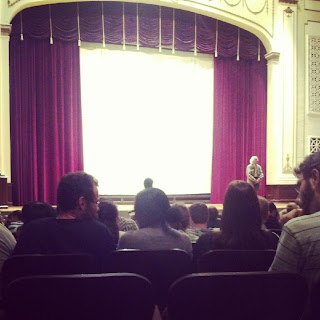 Poignant was the absence of Jeanne-Claude, who as you may or may not know passed away in 2009. She came up very often in the talk- which is to be expected, as all his current projects were conceived with her. It did feel as though he was simply talking about someone who was back home that evening. Upon being asked about a future work to memorialize her, he replied that they didn't believe in that sort of thing. Hearing him speak however, it feels as if carrying on their planned work may be an in memoriam.

At any rate, it was a nice talk and a great opportunity. Wouldn't have missed it for the world! If you're unfamiliar, I suggest checking out one of the many documentaries following their projects from inception to fruition. The Gates is currently streaming on Netflix instant.
Posted by Unknown at 3:52 PM