Went on an order spree recently, here's the loot: 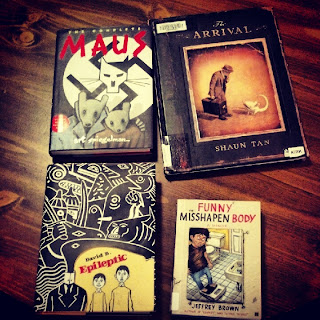 The only one I haven't read is Funny Misshapen Body, I'm eager to check it out. The top two were reads in my Intro to Graphic Novel class. Maus is Art Spiegelman's visualized retelling of his father's experiences surviving Nazi aggression in occupied Poland. It's a very accessible book with a lot of depth to the storytelling, and can be said to be about Spiegelman's relationship with his father as much as it is Nazi occupied Europe. The Arrival is an attempt to create a completely visual graphic novel. There is no text (though there are vague scratches of a made up language, these are treated more as a visual element than real text). Despite having no words, it is incredibly easy to follow. The content works on a variety of levels- one could easily read it as a fantasy book, though the subject matter suggest something a bit more grounded and real.

Epileptic is my second favorite graphic novel of all time (aside from Chris Ware's Jimmy Corrigan, and whose new GN Building Stories I just put on pre-order). It chronicles David B's youth as he is forced to deal with the extensive, sometimes bizarre lengths his parents go through to treat his younger brother's epilepsy. Large, intricate black and white drawings are used to visualize complex metaphors, often based in childhood fantasy, to relate the complex emotions felt about his situation. Like many of the graphic novels I enjoy this includes a lot of brutal honesty and exploration of not just happy or sad, but sometimes dark emotions.

In other news, I picked up a few new games in the Steam summer sale today:

The sales seemed kind of slow today, hopefully something more exciting will pop up later.
Posted by Unknown at 8:54 PM